Apple’s latest smartwatch, the Apple Watch Series 6, gives us almost every feature one could ask for in a fitness tracker while reasserting Apple Watch’s position as the most fun, connected, and complete smartwatch experience.

To be fair, the Apple Watch Series 5 also held those distinctions in its time. You could argue the same going for annual releases farther back in the Apple Watch’s history. But with the Series 6 addition of native sleep tracking and blood oxygen measurements to complement the already solid fitness foundation, there isn’t much more you could ask for in a fitness tracker, or smartwatch, at this point. So, to sweeten the deal, Apple finally gave us some fun colors to keep our eyes from wandering. And at the company’s recent fall event, Apple also introduced the less-expensive Apple Watch SE.

With the Series 6 and SE sitting alongside the even more affordable and still available Apple Watch Series 3, we now have a hard time telling anyone they should buy any other smart watch instead of one of Apple’s. Instead, the more pressing question in 2020 is, “Which one?” 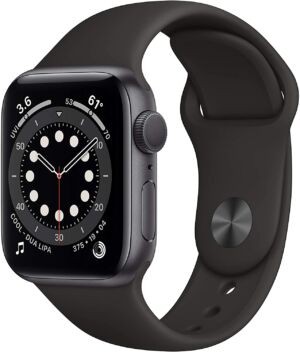 As Apple does every year, it promised all-day battery life on the Series 6, and, as always, even with the introduction of new features, the company delivers. All day means about 18 hours to Apple, and in my experience—with workouts, sleep tracking, and moderate use—it could easily meet the 24-hour mark.

That’s with the inclusion of two improved, always-on features, too—the altimeter and the now-brighter always-on display. The altimeter in the previous generation was only activated during specific activities or apps, but now it keeps track in the background around the clock for “more precise metrics,” Apple says. As for the always-on display, which was first introduced in the Series 5, the Series 6’s outdoor brightness is bolstered to 2.5-times brighter when your wrist is down, which makes an appreciable difference for at-a-glance information, be it in workouts or just to see the time, compared to the Series 5.

Thankfully, Apple has achieved this while not only maintaining all-day battery, but also cutting down charge time and gaining 20-percent faster processing speeds over the Series 5. That improvement arrives thanks to better efficiency on Apple’s latest S6 system-in-package (SiP). Faster processing speeds aren’t going to be something you’ll likely notice, but you will appreciate the quicker charging times of the Series 6. Apple says the Series 6 now takes 90 minutes to charge from zero to 100 and one hour to get from zero to 80 percent, as opposed to the two-hour zero-to-100 charge needed for the Series 5.

This is right on par with our experience, knocking off a little over a half hour of charging time from the previous generation. It may not sound like a lot, but getting a near-full charge from dead to 80 percent in an hour or leaving it 30 minutes more to top up fully is making me like the Series 6 a lot more. Dwindling battery shortly before bedtime or a dead watch right before you need to run out the door isn’t such a drag anymore.

Speaking of charging, you may have heard that this year Apple Watches won’t come with the 5-watt wall adapter. Since that’s the case, you’ll need to grab your own USB-A equipped adapter to plug up the charging cable Apple does ship you. Apple’s thinking here is, of course, to create less waste. So generally speaking, we’re on board with this—it’s highly likely you have one (or many) of these lying around somewhere, anyway.

We’re all for more performance, improved battery life, and saving the world, but one of the first things that will attract some people to this watch are the new colors. Our navy-blue test unit has a casual look that can become more or less subdued with different band pairings. The (PRODUCT) RED aluminum case pulls off a sexier, sportier aesthetic while still being decently versatile.

You also, of course, have the classic aluminum options of space gray, silver, and [rose] gold (the latter is listed as gold, but it’s decidedly pink) as we’ve seen in the past. Stainless-steel options in graphite, silver, and gold, as well as titanium offerings in gray and silver are still available. This brings the highest total of color options ever to the Apple Watch lineup, with 10 bespoke colorways.

While these new colors do bring some much-needed excitement to the Apple Watch aesthetics (especially in red), it still basically looks like the first Apple Watch ever launched five years ago, which, at this point, looks uninspiring at the least. Though this aesthetic has become synonymous with the brand, it’s still not prettier on your wrist than any of your favorite timepieces or hybrid smartwatches, due largely to the square shape that has remained mostly unchanged since 2015.

Customization via the wide-ranging band options has always been the Apple Watch’s strong suit, though, and the new Solo Loop bands add yet another option to the wardrobe. They come in either pure silicone or silicone wrapped in woven polyester, and these feature a single, continuous band that simply stretches over your hand when you want to put it on or take it off. I’m someone with relatively big hands but bone-thin wrists, and either material Solo loop slips over my hand with relative ease while staying put rather comfortably on my wrist.

These bands come in whole-number sizes from one to 12, and Apple provides a printout sizing tool on its website. The tool just barely recommends me a size five when pulled around my wrist as tight as can be, but, of course, you don’t want your watch to fit like that on you all the time. Luckily, Apple sent me a size six, which is the perfect fit for around-the-clock wear. I can move it up and down my wrist, between about two to three inches, but it stays put wherever I place it quite comfortably.

I prefer virtually no movement when exercising, though, so this is where the included Sport band we know from previous years comes in handy. In fact, I’d recommend using this strap or another that fits just a smidge tighter than the Solo loop, if you want the most constant blood oxygen monitoring. The sensor only takes measurements when the watch fits properly. For my needs, the sensor has given me enough readings throughout the day, but know there are some gaps in passive measurement, likely due to less-than-ideal fit.